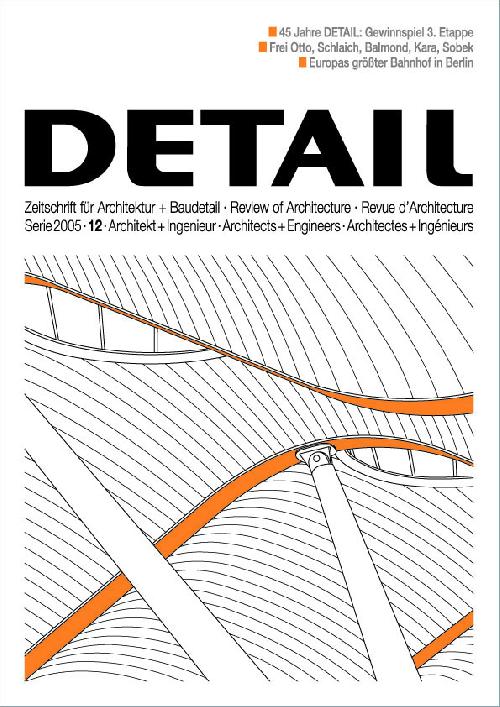 Each issue of the review includes a summary in Italian, French and Spanish. 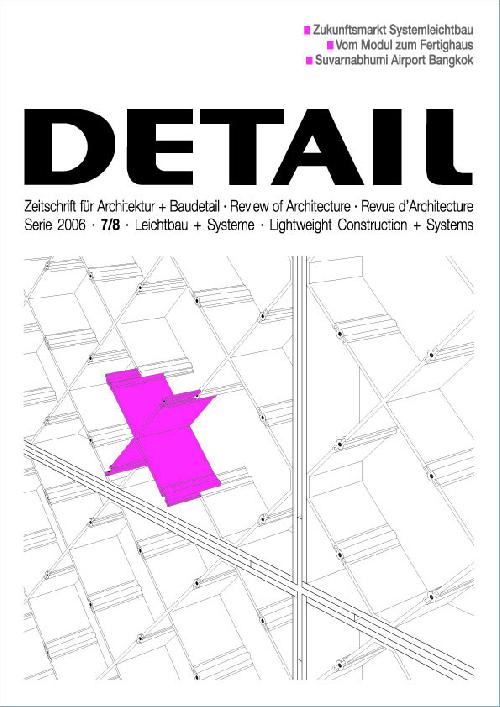 Countless custom-made parts are still hauled to building sites, where - unprotected from the weather - they are installed in a time-consuming manner. Why have these construction systems had so little impact? Is it rekated to the desire, expressed time and again (justified or unjustified), for uniqueness in architecture? 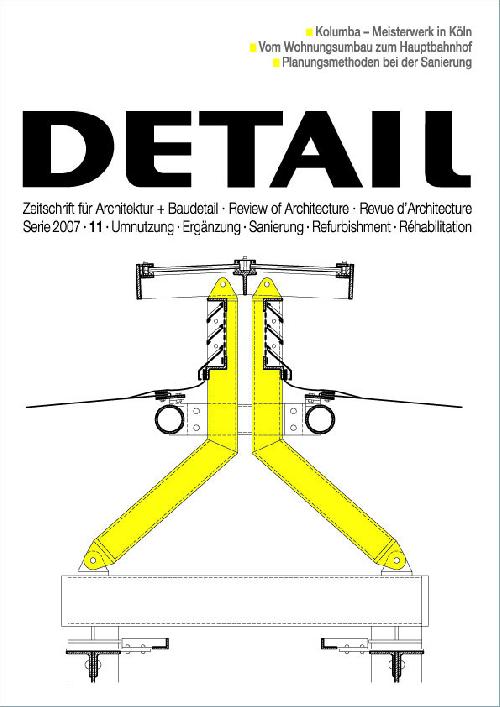 Editorial
La Grande Nation has once again shown us the strength of a grand gesture: at a cost of just under 80 million euros, the French state has refurbished the east wing of the Palais de Chaillot on the Trocadéro in Paris and created a national centre for architecture. 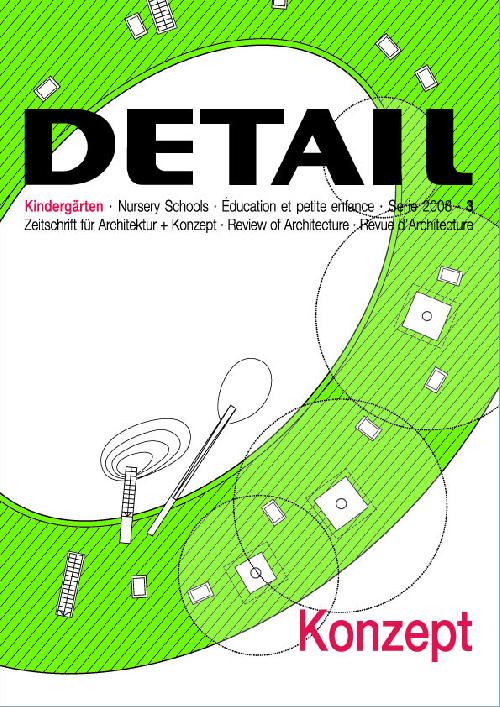 Building for children, whether in the form of a crèche, a nursery school or a day-care centre, certainly presents a special challenge. What architectural language is suitable? How can one lend appropriate spatial form to a pedagogic concept that seeks to impart certain values and abilities? In an environment where young people come to experience and comprehend the world around them, every aspect plays a crucial role. 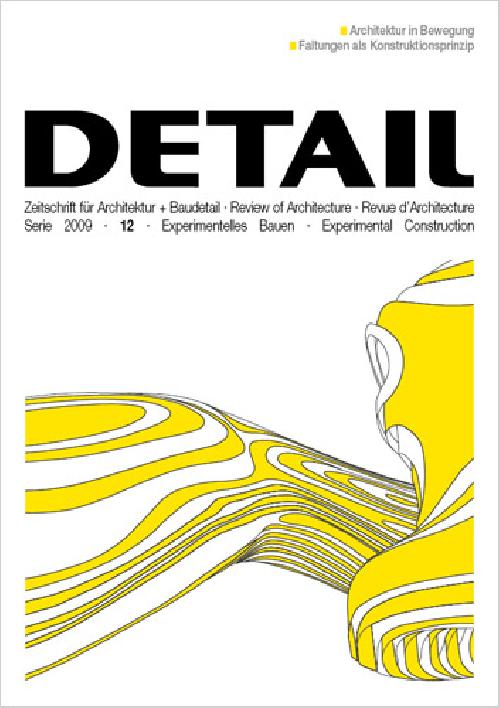 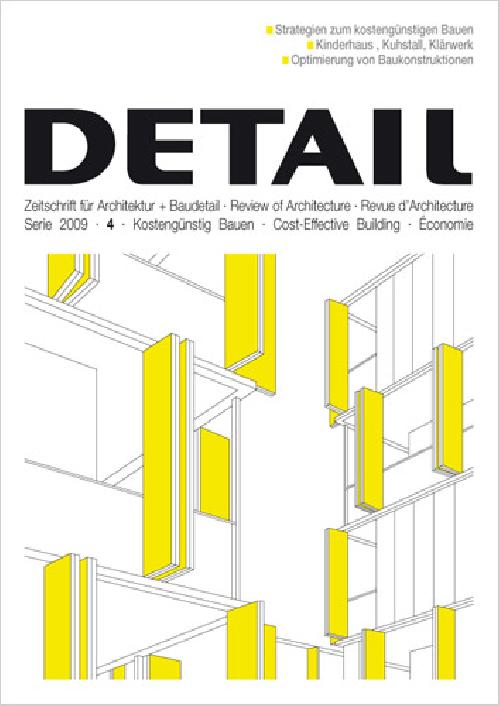 Building costs are usually a topic in the media ­only when they explode and some spectacular or prestigious object is involved, as was the case with the Elbphilharmonie in Hamburg. Rightly or wrongly, it is usually the architects who are blamed for this; and in this respect, they are not entirely unimpeachable for the public image they have. For far too long, architects have presented themselves as design artists for whom mundane tasks like cost control and adhering to deadlines are tiresome obligations.

Everyday construction has been subject to cost constraints not just since the present economic crisis, however. Now that the time of squanderous architectural icons would seem to be past, a radical rethinking process is called for. Architects must bring their competence in the many different fields of construction to the awareness of clients and the public at large. If they succeed in establishing themselves as indispensable experts for economic and sustainable building - alongside their undeniably important role as designers - a new opportunity will present itself: the chance to recover ground that has long been lost to engineers and project managers. 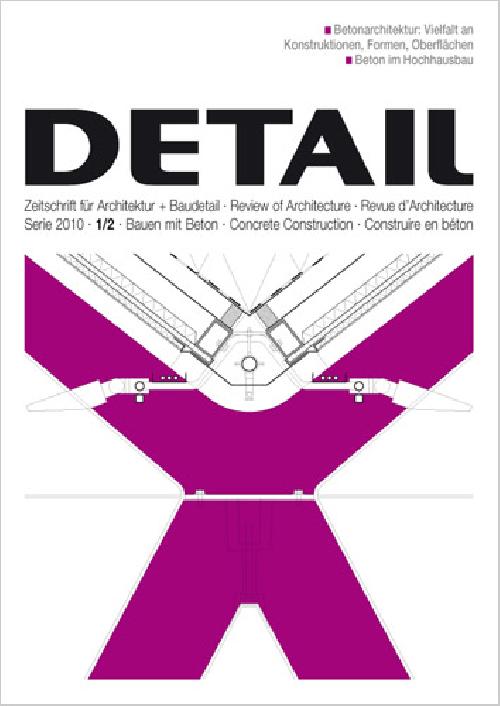 Concrete Construction is various in the building's utilisation, it's surface design, or the technology which it is built with. The buildings in the new magazine mirror this diversity, e. g. the childrens' playhouse near Paris with green coloured, structured exposed concrete by ECDM. Further examples are the system building constructions by Claus en Kaan Architecten, who are at the beginning of rising a new quarter in Amsterdam, and the concrete bearing structure for a administration building in London by Allford Hall Monaghan Morris.<strong> 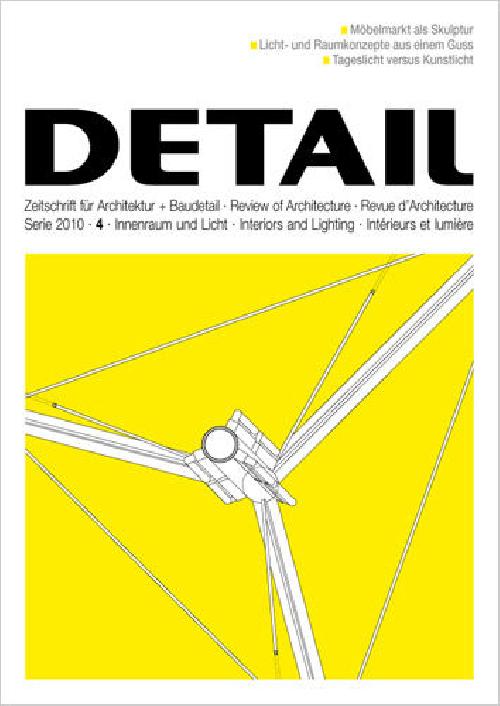 In interior spaces in particular, the usage of light plays a very important role, far beyond the basic concept of guaranteeing adequate brightness. How light and space concepts come together in impressive ways is shown in the sanctuary byAndreas Meck in the parish centre of St. Nikolaus in Neuried near Munich. Its sculptured room extends to two colossal openings, through which diffused daylight streams in. It is as if the borders of the white room dissolve and a mysterious effect becomes a dominant element of the room's experience.
Francisco José Mangado Beloqui follows another integrated concept with the design of the archeological museum in Vitoria. Roof lighting that captures light shoots translucent blocks at an angle through the normally dark exhibition space.

In the new Alice Tully Hall in New York by Diller Scofidio + Renfro, the covering brings the room to light. The veneer of the softly curved wood enclosure is partly punctuated by synthetic resin panels, lighting it from behind; the hall can, before an event »glow«.
Further project documentation presents similar noteworthy interior spaces - from play and bedroom furniture for children in Paris to Tirol's timber system house or the central cascading staircase in a Basel administration building through to the intentionally stylish capsule hotel in Kyoto. The contribution to Sauerbruch Hutton's Museum Brandhorst displays a particularly technical lighting element. In this section, the lighting designer Andrew Sedgwick (Arup) compares the light concept of the Munich museum with Renzo Piano's new museum, the modern wing of the Art Institute of Chicago.
Also in the Discussion section is a closer look at how a basic concept is implemented into an interior. Architects and operators demonstrate the development process of a hotel in Munich, on which Hild und K created the interior including different furniture and light concepts. 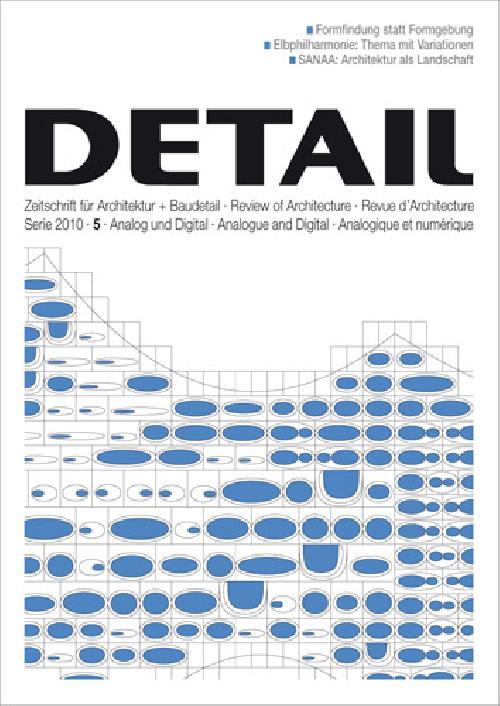 Editorial:
Today, a world without digital technologies is unimaginable, with the idea of somebody founding an institute for analogue studies almost as hard to entertain. That is exactly what Otl Aicher did in 1984. In his definitive work 'Analogue and Digital', published in 1991, he discusses what he sees as the danger of neglecting analogue practices in favour of an abstract concept and logical precision. While the editorial team addressed the topic of digital construction in DETAIL 12/2007, under the title 'Digital Details', for the current edition the title 'Analogue and Digital' seems more appropriate to us. Why?

The questioning of the balance between analogue and digital has become a key topic in any sensible approach to computers. What Aicher describes as ''the school of making'' is being increasingly combined with the most advanced digital equipment in schools. A primary task of new academic centres, with names such as 'Institute for computer-based design' or 'digital design', is to feed their digital 3D models with material parameters to ensure that only projects that can be realised with the materials and technology available are then developed further.
In his introductory article, Achim Menges draws a critical comparison between the double cambered wooden lattice framework of the Multihalle Mannheim, from 1975, and the wooden lattice roofing of the Centre Pompidou-Metz from Shigeru Ban that will be unveiled in May 2010.
In practice, just as in schools and colleges, there are also different approaches to digital and analogue. Cristiano Ceccato, co-founder of Gehry Technologies and associate at Zaha Hadid Architects, shows how the team led by Zaha Hadid and Patrik Schumacher are coming ever nearer to their goal of one continuous digital workflow, from design to actual construction. Herzog & de Meuron present the facade development of the Elbphilharmonie building and Matias del Campo, from SPAN, shows the development of his Austrian pavilion for the EXPO Shanghai 2010, which was executed completely digitally.
In contrast to such digital projects, Kazuyo Sejima and Ryue Nishizawa, from the Japanese architectural firm SANAA, developed their design for the Rolex Learning Center, in Lausanne, with analogue models. Structural planners Bollinger and Grohmann report on how precise plans have been developed from these studies, where even the individual reinforcing steel elements had to be programmed as 3D models. Lastly, we hear from the companies that act as consultants for the architectural offices. Not every architect has the expertise and the resources to deal with complex, parametric 3D models, but this could soon change with the coming generation of architects. 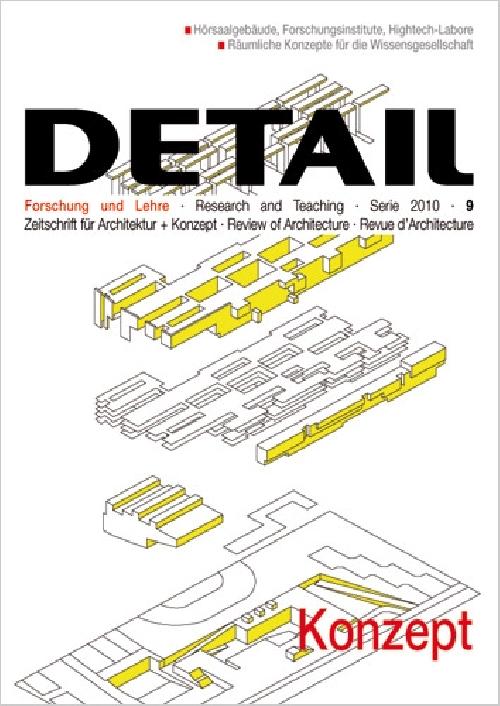 There is no question that climate protection and consideration for resources are among the most important objectives for our future. So there is a crucial need for information for architects, planners and engineers because only those with the necessary knowledge in the various spheres of sustainable building will be able to survive in the future market.
This was sufficient reason for DETAIL to expand its portfolio to incorporate two issues of DETAIL Green a year. DETAIL Green sees itself as a specialised journal dealing with all aspects of sustainable planning and building. Its aim is to focus on the current state of technology as well as to help in providing direction in the perplexing variety of concepts and approaches to solutions, materials and products, support services, laws and standards.
In this issue - and in those to come - special emphasis is placed on international certificates that are becoming increasingly important, in particular, the new DGNB certification; as well as energy balancing of construction materials, life-cycle costs, and questions of recycling and disposal.
The main focus will be on concrete examples of buildings integrating various technologies to develop a holistic concept from the point of view of the participants. In this issue, we show sustainable office buildings ranging from a small wooden company headquarters building to a glass investment bank.
In the manifesto ''Reason for the World'' that was signed at the end of March, German architects, engineers and city planners called for: ''A new mindset, new determination, and a new solidarity crossing all borders'' as well as ''ideas, utopias and perspectives, determination, curiosity and daring, in order to limit the threatening changes to the world'' and, at the same time, committed themselves to providing ''a fundamental contribution to the necessary change in the use of our natural resources through sustainable architecture and engineering talent''.
DETAIL Green will accompany them along this path. 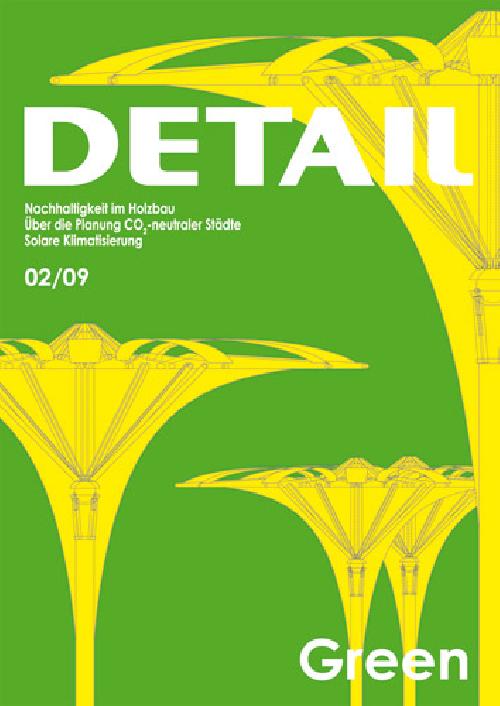 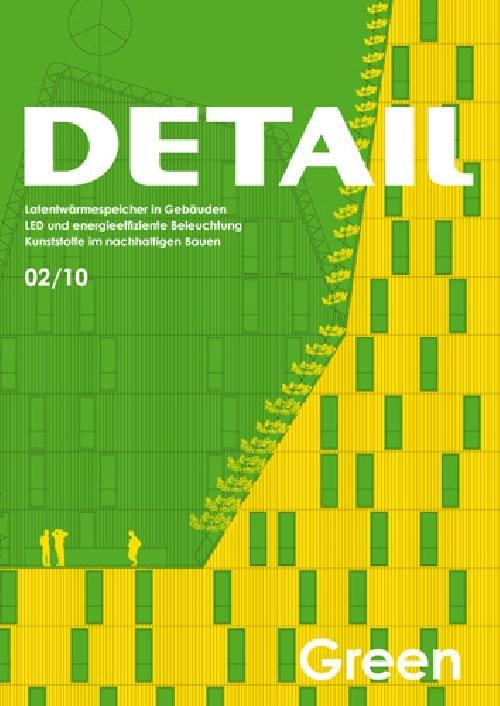